Yiḏaki and the Moieties – Ambiguities

In some of the previous examples and in everyday life, the distinction between different clans’ yidaki is not always clear. Sometimes each clan will bring their own yidaki to ceremonies, but often, they will need to quickly find one that’s good enough rather than having their own ideal instrument. There aren’t always a selection of different yidaki to be picked from and used for different clan’s songs. Usually there are a few good ones that everyone will use. Most of the young men who play in ceremony today don’t make a distinction between different styles of yidaki for different song, but simply want any good yidaki that fits their tastes. 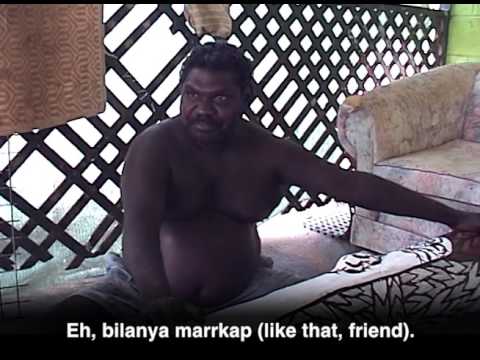 Wukuṉ Wanambi says there’s the old style he can play, and the new “professional” one Milkayŋu can. 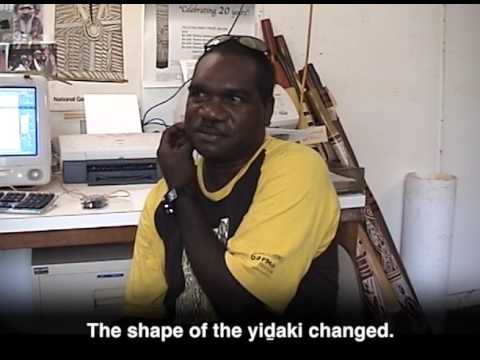 Milkay talks about the change from the old instruments and playing style to the new hard tongue style. 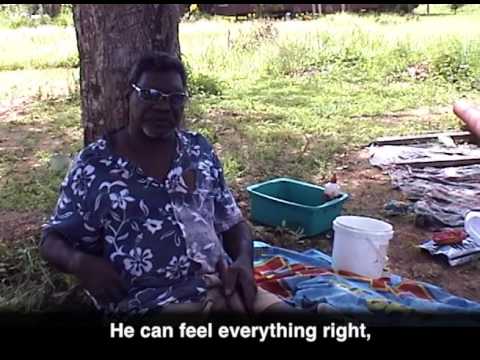 Dhukal Wirrpanda – it’s up to the player to choose the right yidaki for his body.

There is also ongoing change in instrument tastes and playing styles. The young men who play in ceremony these days prefer higher pitched instruments than you hear on old field recordings, played by their fathers and grandfathers. All evidence and Yolŋu stories of today indicate that older instruments were longer and straighter, not so conical as those used today. Most yidaki used in ceremony are in the key of F and above, no matter what clan is singing, and are closer in character to Mirrwatŋa’s F# or Burrŋupurrŋu’s F pictured before than to Djalu’s big E. This is part of what Milkayŋu calls the shift to the ŋänarr-däl, or hard tongue style. As a more aggressive playing style has evolved, the instruments have followed. Some people lament this shift, feeling that yidaki are not being played or crafted properly anymore, and that important clan differences are being lost. To most people, this is simply part of the change that occurs in all cultures, and the fundamental use and spiritual basis remains the same even if the physical forms evolve.

It can be used on manikay (at ceremony). Then after a while it gets lost, we have to go get another one.

Yeah, I’ve got dhaŋaŋ (many). Lots of yidaki. In the bush!

Another cause for ambiguity in some cases is that Yolŋu often don’t hold on to material objects as others do. While a didjeridu player from anywhere else in the world may have a collection of 20 or more instruments, a ceremonial Yolŋu yidaki player might not even have one! Some do keep at least one around, but if it is needed elsewhere, it will be given away, or if money is needed, it will be sold. Yolŋu count on the fact that they will always be able to get a yidaki if they need it. Many raw instruments have been used in ceremony, straight from the bush without any fine crafting done. Especially when the need to play in ceremony is sudden, many yidaki have been borrowed from the Yirrkala art centre, even by well known yidaki makers. A few instruments have been sold to the art centre when a ceremony is completed. Rather than hold on to a good yidaki until the next ceremony, a Yolŋu player may sell it, counting on the fact that another will appear when it is needed. No two yidaki are exactly alike, and the next one may not have all the same qualities that made the first a good one to use in ceremony.

It has also been debated just how specific a yidaki’s characteristics really need to be for public ceremony. The yidaki above is by Gälpu clansman Badikupa Gurruwiwi. It is in D# with a somewhat harsh F# horn, 155cm long with an 11cm bottom end. It is large, relatively deep, and painted with Gälpu clan designs relating to Wititj, but the sound is in between that of Djalu’s and Mirrwatŋa’s in the first example. It has clear bass and high harmonics, but a bit of harsh midrange edge. Datjirri called this yiḏaki “the master key,” explaining that it could be played in all the different styles, for any clan’s music. Djambawa Marawili agreed, and identified this about half of the yiḏaki pictured on this site as “public” yiḏaki, as opposed to clan-specific instruments set down by the ancestors.

Then when Milkayŋu was asked to comment on it, he said that any good yidaki is capable of any style, and that it is up to the player to have the skill necessary to play those styles on whatever yidaki was available. Burrŋupurrŋu echoed these thoughts, saying that while there are specific ceremonial types of yidaki used only at certain occasions, everyday yidaki used at most public ceremonies don’t need to be too specific.

Nederlands NL
When, Where and by Who Yiḏaki are Played