Like everything else in the universe, yidaki can be Dhuwa or Yirritja. There is not just one type of didjeridu known as the yidaki with one story behind it. There are many stories about the origins and uses of the yidaki among the Yolŋu. Some are about everyday usage that are common to both moieties. Some are about very specific sacred types of yidaki that belong to certain clans and moieties. There are several specific types of yidaki that are Dhuwa, and several that are Yirritja. On the other hand, as Marrakulu clan, Dhuwa moiety man Wukuṉ Wanambi pointed out, all the Gaḏayka trees (a totem of his clan) that most yidaki are made from are Dhuwa, so perhaps all of these yidaki are Dhuwa! Wukuṉ did however proceed to say that there are appropriate sounds for different clan’s music.

While there are several types in each moiety, a questionable generalization has been made that yidaki by Yirritja craftsmen are smaller and higher pitched, while yidaki by Dhuwa craftsmen are longer and lower in pitch. This comes mostly from stories told by and about Djalu’ Gurruwiwi (Gälpu clan, Dhuwa moiety), who has the most contact with the outside didjeridu scene, and whose preference is to make the deep, powerful yidaki of his clan. He often speaks of his mother’s Gumatj (Yirritja) clan who have a sacred instrument that is usually smaller and higher-pitched. While what Djalu’ says is of course true, the understanding of it is perhaps oversimplified, as things are never such clear black & white, and there are many clans within each moiety and many individuals within each clan that may have their own preferences. Djalu’ himself will tell you about different types of clan instruments that differ from this generalization, as Wukuṉ and Badikupa do in the video clips below. Many Yolŋu also make a distinction between specific clan-owned ceremonial instruments and “everyday yidaki” that can be used for any public song. 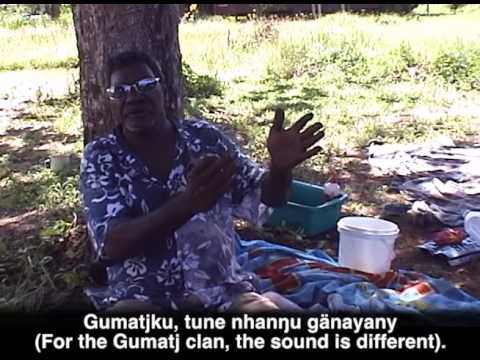 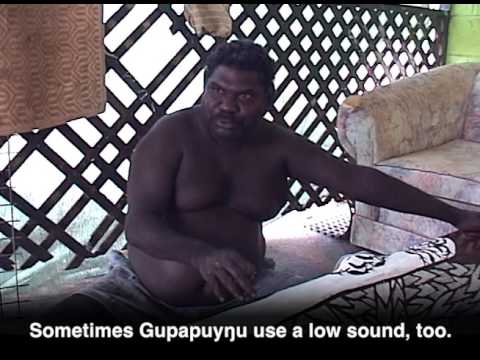 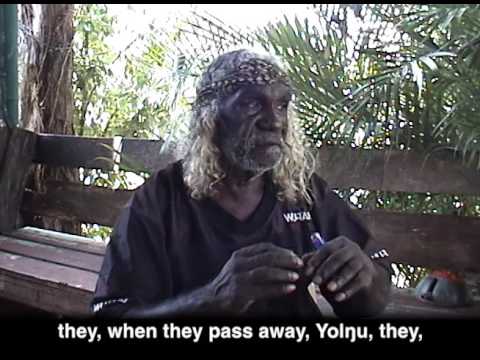 Badikupa talks of Yirritja clans who use long yidaki and his märipulu (mother’s mother’s clan), the Dhuwa moiety Ŋaymil, who use a short, high yidaki

We’ll discuss this issue over the following three pages. On this page we will see examples that support the generalization about short, high Yirritja yidaki versus big, deep Dhuwa ones. The next page will take it a step further by including the issues of personal kinship and opinion in the equation, and the third will investigate more ambiguities.

Pictured to the left are two yidaki which were said by the makers to be of ceremonial quality for their respective clans, and which support the above generalization about Dhuwa vs. Yirritja instruments. On the left is a large yidaki by Djalu’. He chose this for use in a Gälpu clan funeral and at the 2004 Garma Festival Yidaki Forum to demonstrate the proper Gälpu yidaki called Djuŋgirriny’. The simple designs refer to the ancestral olive python Wititj, who spits the rains of the wet season, and whose lashing tongue is the lightning. This yidaki is in the key of E with a soft, round, easily attained F horn tone. Although the key is not very low, this yidaki is loud and has an incredibly strong and warm bass response, while still being crisp and clear in the higher harmonic ranges. Large for a yidaki in the key of E, it is 157cm long with the bell end up to 16cm. The majority of the yidaki Djalu’ makes are large and heavy like this one, but deeper in pitch. He seems to only find higher-pitched yidaki suitable for his style if they are conical and large-bored (once past the nice small mouthpiece, of course), without the high back pressure of the high-pitched and tight yidaki that most young people prefer today. As we shall see later, these yidaki must also be loud and full sounding in order to have the power to stir Bärra’, the west wind.

Listen to Djalu’ play it.
Listen to Mirrwatŋa play it.

The yidaki on the right is by the late Mirrwatŋa Munyarryun, an expert yidaki player of the Wangurri clan (Yirritja). He stated that it has the proper sound for Wangurri song. It is painted with Gomulu, the heron, a role model for Yirritja hunters whose distinctive sound is played on the yidaki in Yirritja song. On the bird’s back is the design for the sacred Wangurri waters called Gularri, which we will learn later are related to the sound of the yidaki for the Wangurri clan. This yidaki is a sharp F# with matching F# horn tone. It has a “dirtier” sound, with more midrange frequencies, and neither the brightness nor bass of Djalu’s. It instead is very constricted with a growling sound. It is 136cm long with a 10cm distal end.

Above is another image to support the theory of a duality between yidaki from Yirritja and Dhuwa makers. Again we have the big E by Djalu’, but next to it we have an instrument in the same key by Dhalwaŋu clan (Yirritja) Yidaki maker Burrŋupurrŋu Wunuŋmurra, whom we’ll hear more about later. He and Djalu’ have made yidaki in the same key, but his could almost fit inside Djalu’s! It’s 135cm long with a 9cm bottom end. This yidaki is smaller bored, with higher back pressure and a dirtier sound, but not so dirty as Mirrwatŋa’s above. It is obviously lacking in the thundering bass of Djalu’s Djuŋgirriny’.