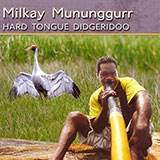 Hard Tongue Didgeridoo: Exercises in Northeast Arnhem Land Yidaki Style
Unlike previous yidaki teaching materials, this CD does not teach Yolŋu songs, but Yolŋu technique, so you can learn the tongue motions with clear instructions and diagrams and easy to remember repetitive exercises. Once you understand the tongue motions and how they are communicated, it is much easier to understand, learn and play Yolŋu yidaki music, and to invent new music with a foundation in the techniques used by the originators of the instrument.

The Mulka Archives
The Mulka Project multimedia centre in Yirrkala was founded in 2007 and, among other things, produces DVDs and CDs for sale, such as the great Mulka Archives series of traditional song. Seven limited edition CDs of new manikay have been released so far, and one double disc set of recordings from 1952-3.

Djalu’ Gurruwiwi & family – Gawurr Manikay CD / Yidaki Festa 2005 DVD
This DVD is likely the first commercially available product featuring song and dance from Djalu’ and his family, shot at a performance in Tokyo, Japan in 2005. The CD features the audio from the same concert plus a bonus track recorded by the Japanese organizer while on a visit to Djalu’s and his brother, singer Gurritjiri’s, home at Gunyaŋara’.

The Yothu Yindi Foundation Contemporary Masters Series
This series features 2 teaching cds by Djalu’ Gurruwiwi with his son Larry, 3 CDs of Yolŋu songs and 1 cd featuring music of neighbouring people from another cultural group. The teaching CDs are obviously of interest, but it is important to not only hear solo yidaki, but the instrument used in context. All of these albums were recorded professionally in a studio in Arnhem Land. Titles include:

Yothu Yindi – Homeland Movement / Tribal Voice / Freedom / Birrku=a: Wild Honey / One Blood / Garma
Some didjeridu players out there began playing because of the rock band Yothu Yindi’s use of the instrument, or where influenced by them after beginning to play. All of the many yidaki players who have been in the band are extremely talented, being chosen out of a large network of relations. Milkayŋu Munuŋgurr, the original player, is the best known, but others who have recorded and toured are Makuma Yunupiŋu, Bunimbirr Marika, Yomunu Yunupiŋu, Gapanbulu Yunupiŋu, Malŋay Yunupiŋu, Nicky Yunupiŋu and Rrawun Maymuru. All of Yothu Yindi’s CDs except ‘Garma’ contain at least 4 traditional Yolŋu songs amidst the rock and pop material. The first album ‘Homeland Movement’ contains the most traditional music, all in a row without the rock and pop music interspersed (not that we don’t recommend listening to it all!).

Songs from the Northern Territory
This 5-cd set is an incredible collection recorded by ethnomusicologist Alice Moyle in the early 1960’s. It represents music from all over the Top End of the Northern Territory, including many Aboriginal groups, so you can hear how didjeridu styles differ. Fathers, grandfathers, and great-grandfathers of today’s Miwatj and Laynha residents, as well as at least one currently living Yolŋu singer, Galarrwuy Yunupiŋu, are featured on volumes 3 and 4. The recording quality is not as good as modern studio recordings, of course, but it is invaluable to hear elders in more natural settings. This set was produced by the Australian Institute of Aboriginal and Torres Strait Islander Studies. It is now out of print, but copies may still be available from various sources.

George Rrurrambu Burarrwaŋa & Warumpi Band
Go Bush! / Big Name, No Blankets / Too Much Humbug / Nerrbu Message
Warumpi Band earned their place in history be releasing the first rock single in an Aboriginal language, and its integrated lineup with Euro-Australian singer-songwriter Neil Murray also served as an early example of reconciliation through the arts. Frontman George Rrurrambu is a Gumatj man born at Galiwin’ku in northeast Arnhem Land. Each recording has folk, rock, and reggae songs in both English and Aboriginal languages, some with yidaki. Rrurrambu’s later solo album Nerrbu Message is mostly roots reggae in both English and Gumatj with some yidaki/voice duets and a beautiful rendition of the Warumpi-penned Australian hit “My Island Home” in Gumatj. The band has split up and Rrurrambu does not have his own website, but there is plenty of information, and the CD’s are widely available on the internet.

Saltwater Band – Gapu Damurruŋ’ / Djarridjarri
This award-winning group from Galiwin’ku is the younger Yolŋu group following in the footsteps of Yothu Yindi. One principal singer-songwriter is in fact Gurrumul Yunupiŋu, who was a member of Yothu Yindi for a time. Following precedent, they sing in a mix of English and Yolŋu languages, and include some traditional yidaki/voice tracks. The band does not have a website, but there’s info and CD sales on the web.

www.manikay.com
This American website features a database and audio files from many out of print recordings of Aboriginal music from all over Arnhem Land. This is a wealth of material that would be very difficult to find elsewhere.