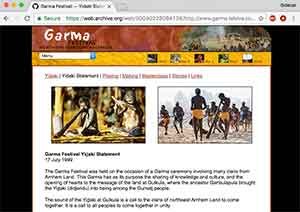 Note: This was originally hosted on the Garma website but it seems to be gone now, so we are preserving the text of this important document here until we learn that it is available again on the copyright holder’s own website.

The Garma Festival was held on the occasion of a Garma ceremony involving many clans from Arnhem Land. This Garma has as its purpose the sharing of knowledge and culture, and the opening of hearts to the message of the land at Gulkula, where the ancestor Ganbulapula brought the Yidaki (didjeridu) into being among the Gumatj people.

The Yidaki comes from Aboriginal law and is used in sacred contexts that have ever deeper layers of meaning. The Yidaki and the bilma (clapping sticks) are the rhythm and pulse for the stories of our ceremonies that go back to our ancestors. They also look forward to the world we share with Balanda (non-Aboriginal people).

The Garma Festival is an opportunity to explore an ethical place in global culture for the Yidaki. Yolngu leaders of Arnhem Land are pleased that guests invited to the Garma Festival organised by the Yothu Yindi Foundation have started the journey of learning Yolngu culture and traditions.

The emergence of an ethical relationship between senior clan elders, whose custodianship of the Yidaki includes the right to permit the use and teaching of the Yidaki, and those guests invited to attend a Yidaki master class led by Djalu Gurruwiwi, lays the foundation for finding ways that Yolngu and Balanda worlds can coexist on the basis of mutual respect, shared rituals, and reciprocal obligations.

Yet Yolngu people are concerned that the emergence of a global culture and the commercialisation of the Yidaki has the potential to separate the Yidaki from its origins in the sacred stories which are at the heart of the songs. Ritual leaders of northeast Arnhem Land are calling for a new relationship with Balanda which recognises the centrality of the Yidaki to the Aboriginal groups who by right and tradition have the Yidaki as one of the instruments of cultural expression.

At this Garma Festival, the clan elders have identified five principles to guide the developing relationship between Yolngu custodians of the Yidaki and the Balanda people who use the instrument:

The basis of a new relationship is respect for the origins and significance of the Yidaki to Aboriginal people of northern Australia.

Aboriginal law protects the Yidaki and establishes ritual exchange processes and reciprocal obligations between those elders with the authority to collect, make, perform and teach the Yidaki, and those people – Yolngu and Balanda – who desire to learn about the instrument.

Yolngu law has always regulated the production and use of the Yidaki in Yolngu society. It is wrong for Yidaki to be produced without reference to, and respect for, these laws. Permission from the custodians of these laws is required.

The Yolngu concept of Yothu Yindi, which recognises duality and fosters balance where there is difference, is a guiding Yolngu philosophy that applies to this new relationship.

The basis of a new relationship will be mutual respect, goodwill, and a commitment to working together to define and evolve an ethical place for the Yidaki in world culture.

With this statement, Yolngu elders of northeast Arnhem Land open their hearts to a new relationship for the Yidaki with global culture.