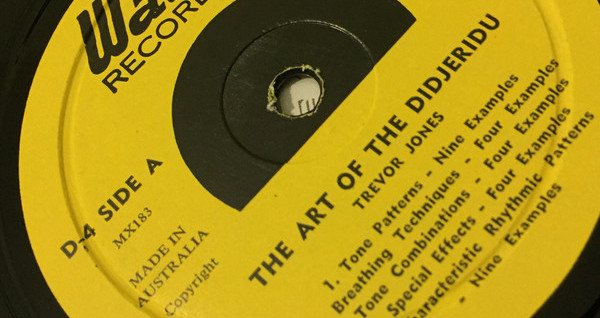 A  Facebook post by Hollow Log Didgeridoos, one of the supporters of the Yiḏakiwuy Dhäwu update, nudged me to start a series I’ve been considering – features of important out-of-print didjeridu recordings. Manikay.com archives most if not all of these, but hasn’t been updated in many years and features out of date RealAudio files. So I’ll present streaming mp3s for you to hear. First up: ‘The Art of the Didjeridu.’

Trevor A. Jones must be one of the first academics to take a serious interest in the didjeridu, including learning the instrument himself. He published several papers on the subject, but we’re talking here about recordings. In 1963, he produced ‘The Art of the Didjeridu’ for Wattle Records. It features Jones demonstrating basic technique, some solo recordings he made of Arnhem Land players, and field recordings Lester and Betty Hiatt made in 1960 in and around Maningrida, north central Arnhem Land. It’s a unique release from the very early days of didjeridu recordings. A demonstration of basic technique by a non-Aboriginal player and samples of the instrument in context.

Following are excerpts from the original liner notes. I haven’t edited the spellings or added any interpretive notes based on my later experience in Arnhem Land… although it’s pretty tempting.

THE RECORDINGS USED
All the sounds heard on Side A of this record were made by Trevor Jones, who has over the past nine years taught himself to reproduce many of the sounds and rhythmic patterns used by native players of the didjeridu. He does not, however, claim to approach in virtuosity the expert aboriginal player, whose long and rigorous training from a very early age in the art of Didjeridu blowing provides him the technique that can only be weakly imitated by a white man. Breathing problems in particular preclude for the amateur the long stretches of endurance that give the native’s performances their hypnotic power and fascination. The patterns heard on Side B. band 1 (yidakistory note: our Track 06), are played by natives who are not fully professional players but who have achieved a remarkable standard nonetheless. These recordings were made by Trevor Jones in Sydney and Perth on occasions when full-blooded aborigines visited those cities for conferences of various kinds. The corroboree excerpts heard on the remainder of Side B feature professional didjeridu players who are accredited masters of their art. They were recorded in Arnhem Land in 1960 by Mr. and Mrs L. Hiatt. At that time Mr. Hiatt was carrying out anthropological research from the Australian National University, Canberra. 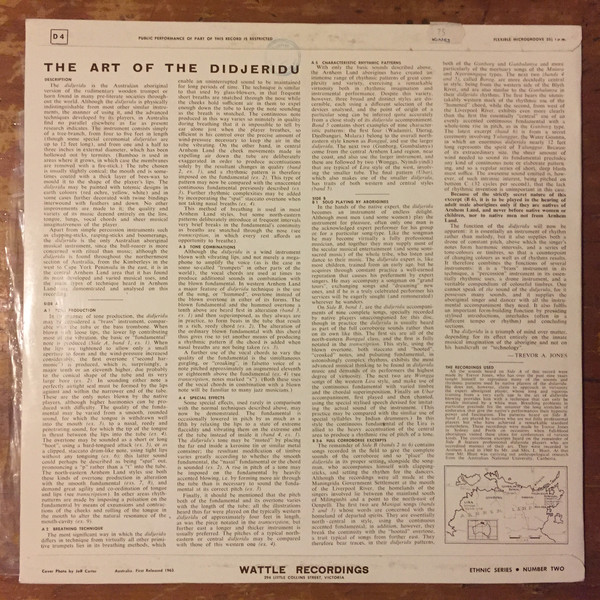 Back of the record sleeve. Pic from discogs.com.

Track 05: Characteristic Rhythmic Patterns
Didjeridu by Trevor Jones. Short examples of nine characteristic patterns: the first four (Wadamiri, Djerag, Djedbangari, Mulara) belong to the overall north-eastern style known as Bunggal, and use the larger didjeridu. The next two (Gunborg, Gunbalanya) come from the central Arnhem Land region, near the coast, and also use the larger instrument, and these are followed by two (Wongga, Nyindi-yindi) that are typical of Lira style of the west, involving the smaller tube. The final pattern (Ubar) which also makes use of the smaller didjeridu, has traits of both western and central styles.

Track 06: Solo Didjeridu Playing
Recorded by Trevor Jones in Sydney and Perth of non-fully professional players who visited these cities for conferences of various kinds. First six solos are of the north-eastern Bunggal class using the blown overtone, both staccato and “hooted”, croaked notes, and pulsating fundamental. The next two songs are Wongga songs of the western Lira style, and make use of the continuous fundamental with varied timbre and the chordal superimposition. Finally an Ubar accompaniment, first played and then chanted, using the special stylised speech devised for imitating the actual sound of the instrument.

Track 07: North Central Arnhem Land Corroboree
Track 08: North Central Arnhem Land Corroboree
Recorded by Lester & Betty Hiatt, Arnhem Land 1960. Manigai, essentially north-central in style, using the continuous accented fundamental; in addition, however, they break the continuity with the “hooted” overtone, a trait typical of songs from further east. They therefore bear traces, in their didjeridu patterns, both of the Gunborg and Gunbalanya and more particularly of the mortuary songs of the Mulara and Ngorunngapa types.

Track 09: Central Arnhem Land Corroboree
Recorded by Lester & Betty Hiatt, Arnhem Land 1960. Borog song, more decidedly central in style, being from the western side of the Blyth River, and are also similar to the Gunbalanya in their didjeridu rhythms. This one bears the unmistakable western mark of the rhythmic use of the “hummed” chord.

Track 10: Central Arnhem Land Corroboree
Recorded by Lester & Betty Hiatt, Arnhem Land 1960. This one is from the west of the Liverpool River and exhibits even more clearly than the previous, the essentially “central” use of an evenly accented continuous fundamental with whole-tone rise in pitch, as in the Gunborg type.

Track 11: Secret Ceremonial Didjeridu
YidakiStory.com takes over: Sorry, I’m not going to include this track. Aboriginal People shared many things with early anthropologists that they choose not to share publicly now. They did not understand the implications of sharing with these (mostly) men who would then publish the material for countless others to see. I never played this track publicly when I lived in Yirrkala, so I won’t put it out publicly on the internet. It contains song and didjeridu from what is considered to by “inside ceremony” belonging to specific clans. It would not be shared with neighbouring Aboriginal People who were not initiated into the given ceremonial business, let alone a non-Aboriginal public.

OK, there you go. A quick look and listen of a historic didjeridu recording you may not have heard. I’ll bring you some more old tracks in the future.

5 Replies to “The Art of the Didjeridu by Trevor Jones”