Let’s listen to some Djaṯpaŋarri. It’s a kind of Yolŋu music and dance which, according to ethnomusicologist Dr. Alice M. Moyle, Gumatj clansman Dhambudjawa invented in the early to mid 20th century. The style was mostly popular with young men during Moyle’s visit in 1962-3, but as those men grew up, djaṯpaŋarri became popular with all ages. In short, it’s characterized by casual, often modern subjects, fun dances, and a more mellow and repetitive yidaki style than most Yolŋu ceremonial music. Because of that last factor, some inexperienced listeners mistake northeast Arnhem Land djaṯpaŋarri for western Arnhem Land music. Newer djaṯpaŋarri usually mentions, or seemingly addresses, young men by their SKIN NAME. 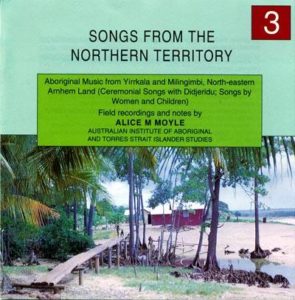 We’re going to listen to three variations on the same song subject from different decades. In the liner notes for Songs from the Northern Territory vol. 3, Moyle writes:

This ‘Comic’ Djatpangarri sung by Minydjun (b. 1944) originated as the result of a Disney film cartoon seen by Yolngu people at one of the air bases during the Second World War. Donald Duck is the subject of the associated dance.

The second and third versions below will be familiar to long time yidaki aficionados, but this first one is a rarity. Dr. Richard A. Waterman recorded Roy Ḏaḏayŋa (Rirratjiŋu clan) and Rrikin (Gumatj) singing ‘Comic’ with Djinini (Djambarrpuyŋu) on yidaki in 1952. Notice that Roy & Rrikin don’t sing anything other than the word “comic.” This stresses the importance of djaṯpaŋarri as a dance music. This isn’t the most intricate poetry you’ll ever hear.

Here’s Minydjun (with an uncredited yidaki player), recorded at Milingimbi in 1962. This version adds the word djaṯpaŋarri itself and other word fragments common to the style. Milingimbi is near the western edge of Yolŋu country. You’ll notice that the yidaki has more influence of western Arnhem Land playing than the other two “Comics.” 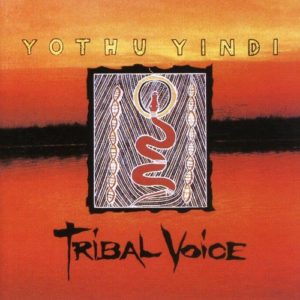 Here’s Galarrwuy with his late nephew Milkay Munuŋgurr on yidaki from the 1992 Yothu Yindi album Tribal Voice. Note that he’s got more of the style of Roy & Rrikin, with the sung yidaki part and short wordless notes. He however adds the skin name references often heard in djaṯpaŋarri songs. And of course, Milkay brings his “hard tongue” to the table.

On Yothu Yindi’s hit Treaty also from Tribal Voice, they mix djaṯpaŋarri with pop & rock music. While you may have just known that bit as “the traditional part,” it’s not serious manikay you would hear in ceremony, but this simple, fun, public song. Listen carefully and you’ll hear that the second word you hear in the first Yolŋu language part around 0:50 is in fact djaṯpaŋarri. You’ll also hear the fragment djaṯpa a few times in the song. Mandawuy also sings a reference to a boy’s skin name and a call out to all the young men.

Note that you can find the second track above on the must-have landmark set of recordings Songs from the Northern Territory from the Australian Institute of Aboriginal and Torres Strait Islander Studies HERE. The 5-disc set contains an invaluable survey of music of the Top End from 1962-3, including lots of incredible didjeridu. Yothu Yindi’s music doesn’t seem to be on iTunes and Amazon and CD’s are getting hard to come by. Search for used copies your favorite way. The first track above, from 1952, has never been commercially released.