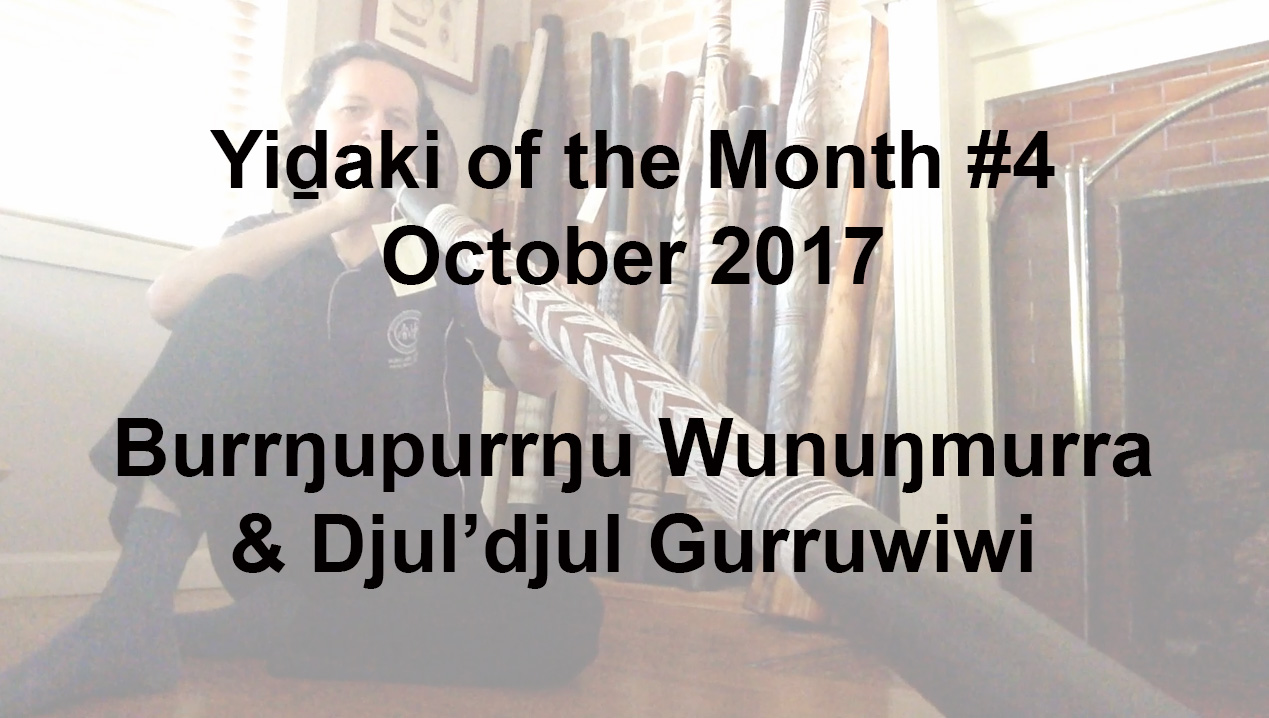 I’ve been stalling on this feature this month, hesitating about doing what I really wanted to. This is a non-commercial site, but I’m going to feature a yidaki for sale on my commercial site at www.gingerroot.com/catalog/yidaki.htm. It’s a great instrument that I shouldn’t still have available after a few months. It was made by Burrŋupurrŋu Wunuŋmurra, whose life was interrupted by leukemia this past year. Check out my tribute to him in an earlier blog post. My old colleague Jeremy Cloake launched a fundraising campaign to help support Burrŋupurrŋu. When this instrument sells, I’ll send another US$100 to that campaign on top of the cut Burrnŋupurrŋu and his wife Djul’djul Gurruwiwi already got.

The rumor is that young yidaki maker Dhapa Ganambarr assisted Burrŋupurrŋu on this one. I believe it from the mouthpiece, which leans more towards Dhapa’s style. Djul’djul provided a fantastic painting as always, this time featuring ganguri, the Dhuwa yam. The leafy vine runs most of the length of the instrument, with the edible tuber at the bottom. As usual, she uses traditional, natural paints of ochre and clay.

Here’s my original demo video for the instrument:

The price is $850 plus shipping. Heck, I’ll make it $800 if you mention “yidaki of the month.” Contact me HERE if you’re interested. I’d love to get this to a good home and get some more funds to Burrŋupurrŋu and Djul’djul.

I promise a more informative and historic yidaki of the month in November!

2 Replies to “Yidaki of the Month #4: October 2017, by Burrngupurrngu Wunungmurra”