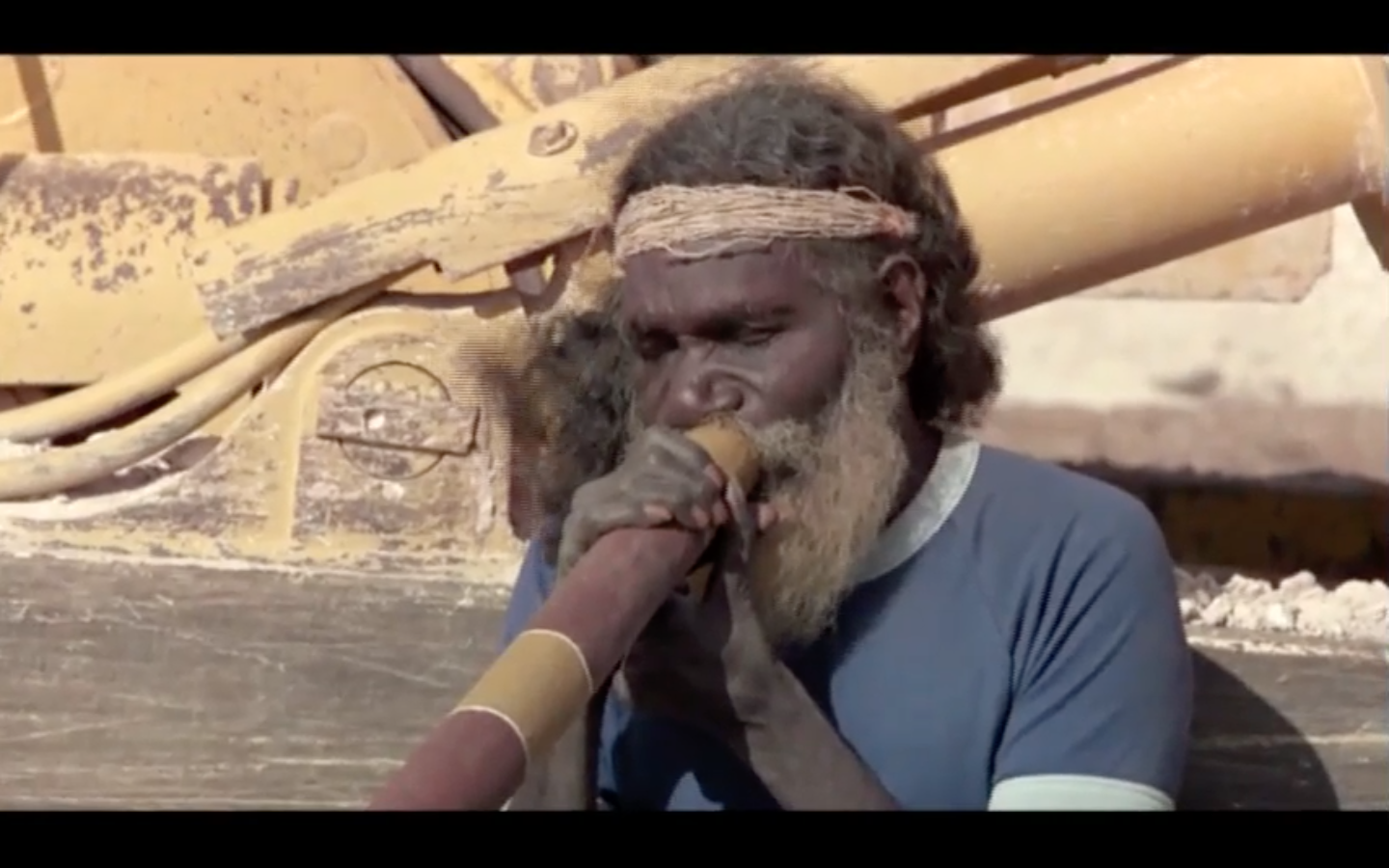 In January, I posted a classic recording of the late Rirratjiŋu leader Wandjuk Marika playing yidaki. Thanks to equally legendary filmmaker Werner Herzog, we also have some great quality footage of Wandjuk playing. In this clip from the opening of the 1984 film ‘Where the Green Ants Dream‘ Wandjuk plays a snippet of brolga song.

The film also features a few clips of song & dance. But no, in real life Yolŋu don’t ever freeze like that at the end of a dance.

This may be a controversial statement, but those are the only good parts of the film. As a whole, it bears all the marks of an outsider with grand ideas telling Aboriginal People what to do instead of listening to them and letting them tell their own story.

Wandjuk spoke about the experience of making the film as he narrated the book Wandjuk Marika: Life Story, as told to Jennifer Isaacs (which you should read). 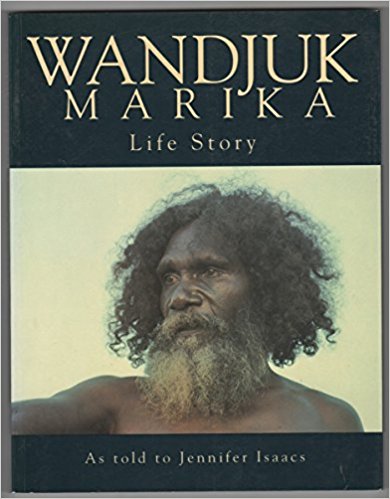 I was very sad and we were there for three-and-a-half weeks to make the Green Ant film… All my people was there and three of us is main ones: Roy, Wukaka and myself, Wandjuk Marika.

We change the name instead of our own names… We told them, “Do not put our name on it, because my name and Roy’s name is on the land right book. The people have been push ourselves to Land Rights case, Rirratjiŋu.” But I found it there, on the film – which is make me sad or unhappy…

Then the three of us flew over to Melbourne pretending to the Land Right case, which is Judge Blackburn’s work, which is made up – that was the very dangerous thing to do…

In the late 60’s and early 70’s, Wandjuk and Roy Marika signed the Yirrkala Bark Petition and played significant roles in Milirrpum v Nabalco Pty Ltd, Australia’s first ever land rights case, wherein the people of Yirrkala sued to claim ownership of the land they had lived on for untold generations. They of course lost. Their law was not recognized by the occupying government. This was a very tender sore spot for the Yolŋu People, and Wandjuk worried that the film’s re-enactment made a mockery of the real case that he cared so much about.

Wandjuk also called out the phoniness of the story and complained about being directed by an outsider to make a mockery of Aboriginal law.

…in that film that Dreaming is made up (that’s a made up Dreaming, yes it’s a true story about the Green Ant Dreaming but from Oenpelli Dreaming, not for Rirratjiŋu, not for Wuḻaḻa, that Dreaming is for Gunwinggu western Arnhem Land. Green ants don’t live in the desert…)

And also I always feel angry and get wild because they always ask me to say this and say that and do what I don’t want to do, and I said, “Look, don’t ever ask me to do that… I know how to speak English, I know what to deal with…”

and Werner Herzog said, “Yes, I know but I’m from a different country.”

“What does it matter what different country, why you come to Australia?”

There it is. The do-gooder outsider co-opting the indigenous people and their story in his own way. And this is why Wandjuk says:

The special film was the one I made by myself. I ask Ian Dunlop, he was working in Film Australia, my film is (In) Memory of Mawalan.

After his father Mawalan’s passing, Wandjuk instigated a large Djuŋguwan ceremony and invited Ian Dunlop and crew to film it as part of the Yirrkala Film Project. It’s a stretch for Wandjuk to say he made the film by himself, but we know what he meant, and how important the movement he began is. He was a large part of the founding of Buku-Ḻarrŋgay Mulka, Yirrkala’s own community art centre in the 1970’s. When we expanded it with the Mulka Project multimedia centre in 2007, we had the specific goal of turning modern media over to Yolŋu to tell their own stories from now on. The way Wandjuk would have wanted it.

See how I drew you in with yiḏaki then made this post all about larger cultural issues? Tricky, eh?