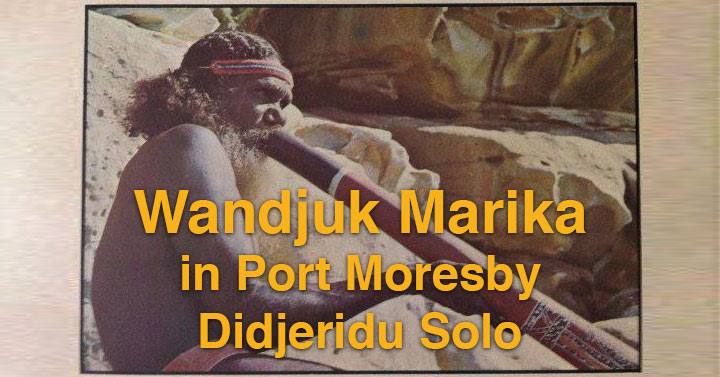 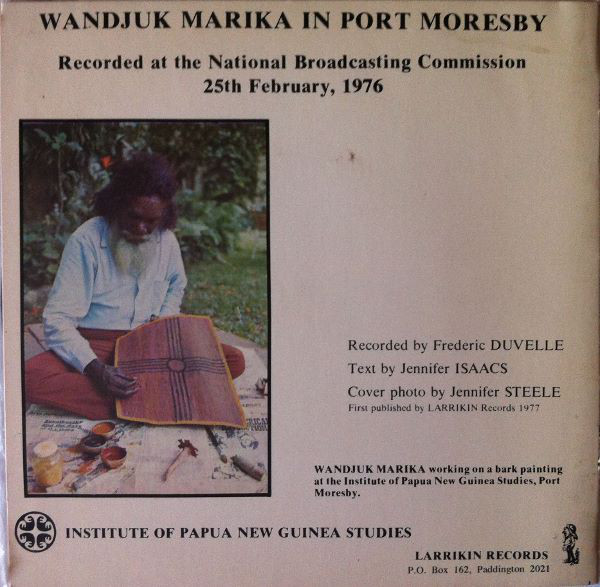 From the original liner notes by Jennifer Isaacs, with modern spellings added for the titles:

(a) Dangultji (Ḏaŋgultji) – the Brolga. A secular camp dance in which the performers, particularly children, imitate the behaviour of the brolga.

(b) Malwiyi (Maḻwiya) – the Emu. A camp dance about the emu, Australia’s largest bird. It is flightless and may grow to 1.8 m in height. The Aborigines hunt them for food and relish their large green eggs.

(c) The Wawilak (Wäwilak) Story – The Wawilak myth gives rise to a most important cycle of ceremonies in North East Arnhem Land. In the Dreamtime the two Wawilak sisters, one of them pregnant, travelled over the land and finally came to rest by a lagoon where they built a shade for the birth. One of the sisters was gathering paperbark when she accidentally polluted the pool wherein dwelt the Lightning Serpent, a huge snake which could reach from the heavens to the earth. In a fury he sent a black cloud overhead, and torrential rain. The sisters cried out and danced to appease him but it was to no avail, and he swallowed them. The Wawilak sisters are the Creation Sisters – they gave rise to the present Aboriginal population.

(a) The Wawilak Story (from side one).

(III) Djuwan – This accompaniment tells of the time after the Dreamtime, when the children of the Creation Sisters return to the sacred waters where the Serpent Lives and re-enact, in ceremony, the original events. The song and didjeridu accompaniment are used in mortuary and age-grading ceremonies.

(b) Kadabana (Gatapaŋa) – the Buffalo. Buffalos brought by early European settlers have run wild in the swamps and plains of Arnhem Land. This is a camp dance which describes the heavy animal crashing through the undergrowth being hunted by Aboriginal men for food.

(IV) The clouds – this segment accompanies the song which tells of the rain, and dark cloud which the Lightning Serpent sent overhead.

(d) Katjambal (Garrtjambal) – the Kangaroo. The story of the kangaroo as he bounds along the grassy plains through the scrub.

The Rest of the Liner Notes:

Wandjuk Marika is a ceremonial leader of the Riratjingu (Rirratjiŋu) clan of North East Arnhem Land and Chairman of the Aboriginal Arts Board of the Australia Council. He was born about 1930 om what was then the small mission settlement of Yirrkala. This has since become the focal point of one of the most important struggles for ownership of land by traditional Aborigines, and the site of the huge bauxite mine, Nabalco. Wandjuk Marika and his people have been catapulted into confrontation with an industrialised society and in the process they have emerged with a great degree of strength and political and social cohesion. Traditional culture remains a vital part of life in Eastern Arnhem Land, the stories of the exploits of the ancestral beings of the Dreamtime such as the Djanggawul (Djaŋ’kawu) and the Wawilak Sisters providing the basis for lengthy ceremonial cycles involving ritual and social obligations covering every aspect of life from birth to death.

Wandjuk Marika learnt to play the didjeridu as a small boy from his father, Mawalan, who was a great and respected ceremonial leader, and who passed on to Wandjuk his knowledge of the sacred lore, the ceremonies and the sacred designs, just as Wandjuk is training his own sons today.

As well as his role in the traditional life of the Riratjingu, Wandjuk is also striving to explain the stories and create an awareness of the depth of his own culture in all Australians, through his work on the Australian Aboriginal Arts Board.

He says: “We realise the old way will never return, but we believe that much of our music, songs, dance and art can and must be preserved as a vital part of the culture of mankind.”

THE DIDJERIDU (or YIDAKI)

The didjeridu, or drone pipe, is the traditional wind instrument of the Aborigines of Northern Australia. It is in fact a branch or trunk of a young eucalyptus, or string bark tree which has been hollowed out by termites. The musician taps the tree to see if the resonance indicates it is sufficiently hollow, and then after he cuts it down, he selects a suitable length for the instrument. This is smoothed and painted, and bees wax or gum is applied to the end to be placed in the mouth. This narrows the diameter of the interior hole, and provides a comfortable mouthpiece. The length and diameter of the instrument determine its pitch and the tone produced when it is blown with loosely vibrating lips. Variations in the sound produced occur when the lips are tightened, or when the tongue is moved towards and away from the opening. The vocal chords are also used when producing a croak.

The sustained rhythm is achieved by a unique form of breathing. Air is drawn in through the nose in quick breaths. This is retained in the cheeks and continuously expelled through the mouth to maintain the sound.

The instrument is generally played as a rhythmic accompaniment to the songman and clapsticks, however, it is also played solo for camp dances and general fun and amusement.

SEMINAR ON ART IN THE THIRD WORLD

Thanks to John of manikay.com for first making me aware of this recording many years ago. Images borrowed from discogs.com. No, I do not have rights to this recording or text. But it’s long out of print, most likely never will be reprinted, and I know many of Wanjduk’s living family and bet they’d be happy to let this recording be heard as long as nobody’s selling it for a profit without them.