Back in September, I wrote about The Mulkay Manikay Archives and promised to share more detailed information about the Dhalinybuy CD. Here we go!

I’ve talked a lot about Dhalinybuy since this blog started last April, mostly in the series of posts about the short film Two Brothers at Galarra. The families of the late Mathuḻu Munyarryun embraced the creative potential of the Mulka Project’s new media facilities before other local Yolŋu. They pitched the first film idea outside of a workshop and recorded the first CD within a month of Mulka’s official launch.

On 31 August 2007, I drove out to Dhalinybuy with Mulka’s first two employees, Ḏiṉḏirrk Munŋgurr and Ṉuwaniny Burarrwaŋa, some basic recording and filming equipment, and a bunch of food. We began with the senior singers, Malalakpuy and Wakaŋ, supervised and sometimes joined by Mathuḻu, along with the late Mirrwatŋa on yidaki. 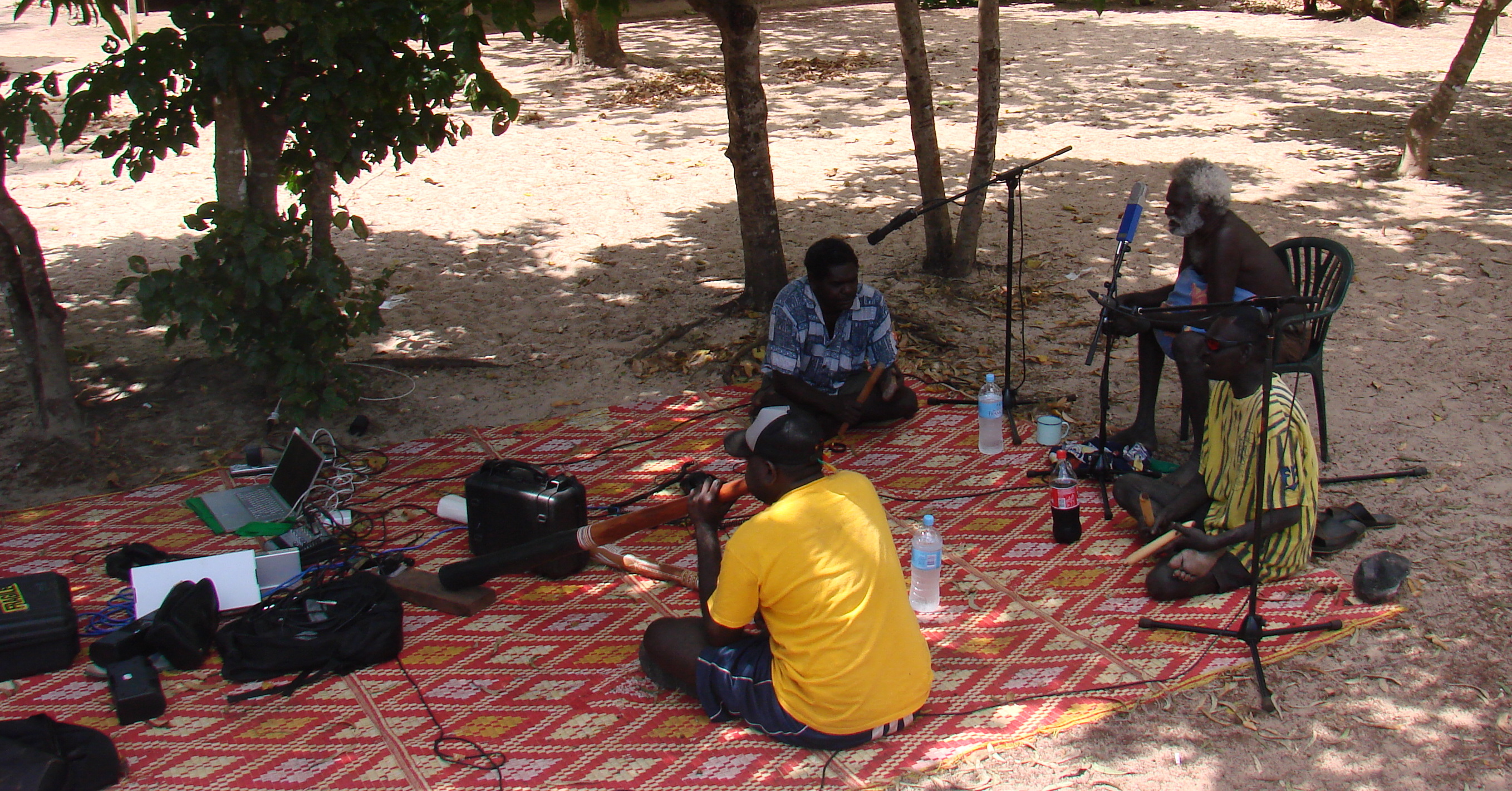 Listen to what happened from there on the CD, which is available from all the usual digital music retailers and from several yidaki sellers around the world. Here’s one sample.

After the recording, I asked Mathuḻu, “what will this CD be called? What will the album cover be?”

He only had to think for a few seconds. The title would be Baltha. Baltha, the Wangurri clan thundercloud which they sang at the beginning and end of the cycle we just recorded. He described the shape of it for me. He explained that they sang the journey of water from where we sat near the river Gularri to the sea, where it is sucked up by Baltha and rained down on the land to begin the journey again. They sing this cycle at funeral ceremony, the story of water paralleling the story of the human soul. The cover image would be a photograph of the cloud called Baltha.

While I loved the idea, I didn’t like my chances of pulling it off. I thought, “How am I supposed to get a picture of that? Call the Bureau of Meteorology and describe it to them, hoping they’ve got an archive of cloud photos?”

But I didn’t have to. Not long after the recording session, funeral ceremony was underway at Dhalinybuy. These ceremonies can last for weeks or even months. On 6 November, all of us at Yirrkala knew the funeral was wrapping up. My wife and I were out for a walk at sunset, looked in the direction of Dhalinybuy, and there it was. Baltha. Rising over the sea in Arnhem Bay. Possibly just as they were singing the end of this song cycle to conclude the ceremony.

I snapped a bunch of pictures and showed them to Mathuḻu at my next opportunity. He said, “yes, that’s it. That’s the cover.”

the old man tells the story

As I said in my prior blog post about the CD series, the late founding Mulka Project Director, Dr. Raymattja Marika, and I had big plans for the liner notes. We wanted to show up every outsider academic who published recordings of Aboriginal music. Dr. Marika sadly passed away suddenly before we finished the process on any of the three CDs we had recorded, then I suddenly had to leave Yirrkala due to my own family medical crisis. Those three CDs and several more in the end were released with simplified titles and no information other than track and artist names. I do have the recording and text of the late Mathuḻu telling the story as he wanted it in the liner notes, so will share those with you all now. The late Margaret Yunupiŋu and I did the basic transcription and translation, which was then polished with help from Dr. Marika and the late (wow, I have to say that a lot) Gulumbu Yunupiŋu.

Tracks 1-7 on the final version are archival recordings, some of which are discussed thoroughly here.

Note: Mathuḻu originally named this section Bulmirri. another name for the grass that he used in his story.

Note: Mathuḻu originally called this section Guḻarri after the specific water course, rather than Gapu, which is the general word for all water.

An Additional Note from Mathuḻu at this Point In the Recording

Note: Mathuḻu used another name for the heron, Gany’tjurr. Which incidentally, is one of my given Yolŋu names.

There was meant to be more written to flesh out the context, but this has been what the senior man of the family wanted to tell all of you out in the world about what was happening in the songs. I hope that if you have the album, this brings you some new appreciation of it. If you haven’t bought it, I hope you do.

4 Replies to “Dhalinybuy CD – In Depth”